Sadie Moss,Lia Holland,C.J. Grey Oct 19, 2021 Sadie Moss,Lia Holland,C.J. Grey
A complete reverse harem series in one bingeable box set! Book one: Saved by Blood They found me nearly dead. To save me, they had to turn me.... When I moved to New York after a bad divorce, I planned to re-invent myself. I just had no idea the "new me" would be a vampire. Or that the three (yes, three!) vampires who turned me would be the hottest, most frustrating men I’d ever met. Now, creepy shadow monsters are stalking me, and I don’t know why. But teaming up with these dangerously sexy brothers may be my best chance for survival, even though being around them does weird things to my heart. The old me was too scared to even start dating again. The new me? She wants to devour all three of them. Book two: Seduced by Blood I once was told vampires are immortal but not invincible. I’m about to find out how true that is. Thrust deep into the politics and intrigue of vampire society, I’m doing my best to keep my head above water and prove I belong here. But the threat from the shades is growing. Inside the castle walls, whispers and stares follow me everywhere I go, and I'm pretty sure the king wants me dead. The three vampire men who saved my life are the only ones I trust. So, why don’t they seem to trust themselves around me?  Book three: Ruined by Blood  My vampire men and I are stronger together. At least, we’re supposed to be. The weird sisters got what they came for: a magical object that puts them one step closer to unleashing hell on earth. The cowardly king Carrick refuses to fight, which means it’s up to me and my men to stop them. But after the attack on the Penumbra, I’m not sure I can. Malcolm is missing, and without him by my side, nothing feels right. Somehow, these three lethally gorgeous vampire brothers have become like three parts of my soul, as necessary to my survival as the air I breathe. Now, I’m torn between my drive to hunt the sisters and my need to save one of the men I love. Failing at either is not an option. This box set is the complete collection of the best-selling series The Vampires' Fae: Saved by Blood (Book one) Seduced by Blood (Book two) Ruined by Blood (Book three) The Vampires' Fae series is a medium-burn story. This boxed set contains strong language, sexual situations, and a heroine who doesn't have to choose between her men. 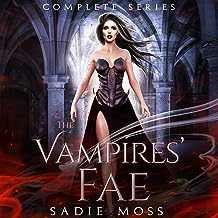